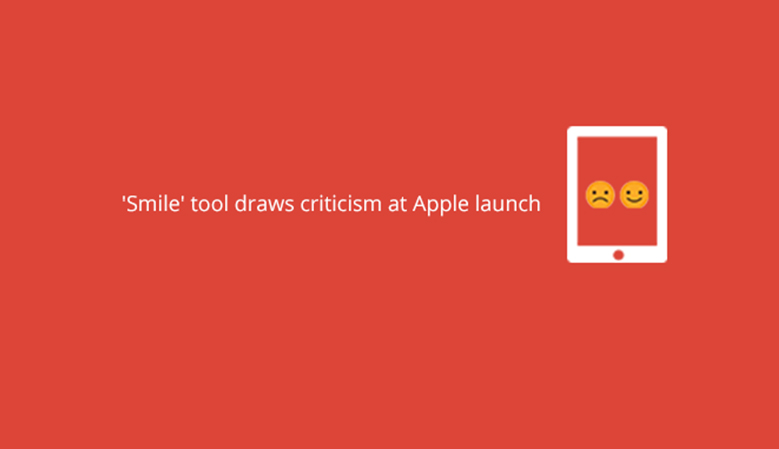 A woman’s smile being “fixed” using software leads to accusations of sexism against Apple and other tech firms – who still employ more men than women The world heard earlier this week about how Apple is launching new products, such as the iPad Pro and a new Apple TV. At the event, to illustrate some of the features and quirks of the new iPad Pro, Eric Snowden, Adobe’s director of mobile design, showcased Adobe’s updated suite of editing apps. Snowden proceeded to edit an image of a woman, digitally manipulating, or “fixing”, her mouth so that she appeared to be smiling. Snowden told the crowd, “I wish she had a little bit more of a smile. I think it would warm up the design quite a bit. Luckily we have an app for that.” Despite applause filling the auditorium afterwards, accusations of sexism immediately emerged on Twitter. Disappointed users questioned Snowden’s use of language, asking “how did someone at Apple OR Adobe not think through the optics of a dude “fixing” a woman’s smile?” Another wrote, “Now Adobe can literally “Fix” pouty women for you. Way to go guys!” Many found the demonstration too reminiscent of men, often strangers, asking women to smile – a demand many women find demeaning and rude. (“Putting on a fake smile doesn’t benefit me, and therefore the benefit is purely for the seemingly well-meaning smile requester. They are telling you to smile so that they have something prettier to look at whilst they go about their day,” Daisy Lindlar wrote last year on the Huffington Post.) Carolyn Leighton, Founder and CEO of Women in Technology International, told BBC Trending that although it was unlikely that anything malicious was intended, the photo subject was “a poor choice.” “It just triggers this feeling that so many people have,” says Leighton. “It’s just like when these companies put men in front of the camera instead of women. People are out of touch with the fact that women are equal partners in the field.” The criticism didn’t end there. As the event unfolded, spectators pointed out that only three women were featured in Wednesday’s presentation. Of the three, only one was an Apple employee. One user wrote: “only 3 women so far have graced the Apple event stage compared to the 10+ men. And of course, a woman is talking about shopping. Hmm.” And yet, this figure is in fact the largest number of women presenting in a single recent Apple event. In June 2014 – where the Apple Watch and iPhone 6 were launched – no women presented. Lisa Maatz, Vice President of Government Relations at the American Association of University Women (AAUW), said that the lack of female representation was a “sad commentary” on the wider industry. “We need role models. To have Apple’s big launch only featuring a few women, doesn’t give girls an encouraging message about technology being a future career.” Although Apple CEO Tim Cook has admitted that greater diversity was required, in an interview earlier this summer he said the fault lies with the tech industry as a whole failing to reach out to women. According to a report by the AAUW, only 26 percent of science, technology, engineering and mathematics jobs are held by women, falling from 35 percent in 1990. Since a report last year found that seven out of every ten employees at Apple was male, it appears Apple has taken strides to improve. In August, it was announced that Apple has hired 11,000 women over the past year, a 65% increase from the year before. Blog by Olivia Lace Evans Next story: Why this picture of a migrant child being hugged went viral

The Government will have access to all encrypted information, including personal emails, messages or even data stored on a private business server,